Yangon, Myanmar (GNJ): A Catholic religious woman took to the streets in the city of Myitkyina, the capital of Kachin State in the north of Myanmar, and asked the security forces not to shoot young demonstrators who are protesting peacefully. Her name is Sister Ann Nu Thawng of the Congregation of St. Francis Xavier in the diocese of Myitkyina, became the heroine of yesterday, February 28th, 2021. Here is my interview translation into English version. 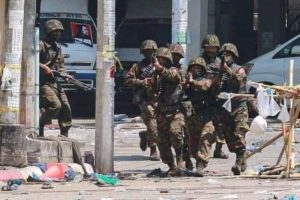 Joseph KZH: Mingalabar Sister Ann Nu Tawng. Why did you kneel in front of the military?

Sr. Ann Nu Tawng: I knelt down in front of the military because I wanted them to show that their brutal actions against unarmed protestors around the country is their worst acts of persecution.

Joseph KZH: Were you afraid you would be shot?

Sr. Ann Nu Tawng: As human being, I am of course afraid of being killed. But in this incident, I am not afraid of being shot because thousands of unarmed and non-violent civilians are being tortured and killed by military and police forces around the country.

Joseph KZH: what is your impression to know that your action has gone around the world?

Sr. Ann Nu Tawng: I feel this is the divine providence of God. I was surprised to know that my action was reported to Vatican from Mr. Joseph Win Hlaing Oo @ Kung Za Hmung who is a publisher and chief-editor of Gloria News Journal which is the first private Catholic media outlet in Myanmar. I am very happy to know that the world knows the brutal action of Myanmar military by my action. 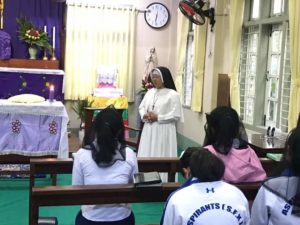 Joseph KZH: Are you ready to make more protests? Which?

Sr. Ann Nu Tawng: Actually, I did not any plan to protest against military coup because Cardinal Charles Bo and my congregation’s superior prohibited nuns in Myanmar not to participate in demonstrations against military coup.  But when violent crackdown of security forces to unarmed peaceful civilians were happening in front of me, I could not be lukewarm and ignorant. I decided to protect civilians.

28th February was Sunday. Normally I closed my clinic on Sunday but as medical doctors are doing CDM (Civil Disobedience Movement), I open my clinic to give medical treatment to injured protestors. When I was inside my clinic with some CDM doctors, many thousands of non-violent protestors from different walks of life gathered to start a demonstration against the military coup. Then informal persons informed police and army on 28th February that mass rallies were gathering near my clinic. As many thousands of non-violent protestors were passing through my clinic shouting their slogan of releasing our President Win Myint and Aung San Suu Kyi and other demands, I went to my clinic out supporting them by clapping my hands. As people were marching with their slogans and demands, I saw army and police with their vehicles behind the last persons of protestors. Suddenly, police officers jumped down from their car and started beating, kicking and stoning unarmed peaceful protestors. Some of the protesters had fallen upon them. 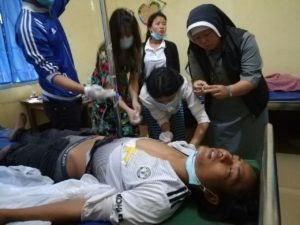 Without prior to any decision to join protestors, I suddenly decided to ran to and protected them with my body to prevent them from arrest by police and army. I shout loudly to security officers not to beat, to harm and to arrest them with my tears. Due to my begging, police and army step back and I went to the middle of road, kneeling down on the road and I begged them not to beat, to shoot our people and I told them that I know you all are good heated officers and they should not harm them and our people are also good hearted and peaceful people. Then my police officer told me that my life is in danger and I should go back to my convent but I replied to him that instead of shooting, beating and arresting people, they can shoot and arrest me. I told them that I sacrificed my life for my people. Now I am protesting military coup by doing medical treatment to injured people in my clinic.

Joseph KZH: What do you ask to the military?

Sr. Ann Nu Tawng: I told security forces who stood in front of me. “I really beg you. I know you are good hearted people and you will not shoot our people. Don’t shoot them. They are good people and they are unarmed and non-violent people. If you want to shoot them, you shoot me for them. I am ready to die for them.

Joseph KZH: What is happening in Myanmar?

Sr. Ann Nu Tawng: In Myanmar as you know, we were just free of dictatorship in 2010 and we are benefiting democratic fruits only in 10 years. But as Covid-19 pandemic occurred, all people in Myanmar were jobless and lack of income because shops and restaurants were closed. In my region of Kachin state, we have thousands of IDPs (internally displaced persons) by civil war between KIA and Myanmar military. So our people are severely suffering economic collapse and now military coup is persecuting our people in many ways again.

Joseph KZH: Are you afraid?

Sr. Ann Nu Tawng: No. I was not afraid to military coup and security forces. But a thought entered in my mind that time was as Cardinal Charles Bo and my superiors ban nuns and priests joining demonstration, they might get me angry and I might be expelled from my nun life. But I decided to accept their decision and I am ready to leave my religious life. When the night came, they actually greeted me with applause for my great work for my people.

Joseph KZH: What would God want for Myanmar?

Sr. Ann Nu Tawng: I feel we should not only pray for our people but we must also accompany with our people’s struggle. We priests and nuns are parents of our people and we must closely walk together with our people.

Joseph KZH: What should priests do for Myanmar?

Sr. Ann Nu Tawng: I feel we should not only pray for our people but we must also accompany with our people’s struggle. We priests and nuns are parents of our people and we must closely walk together with our people without fear.