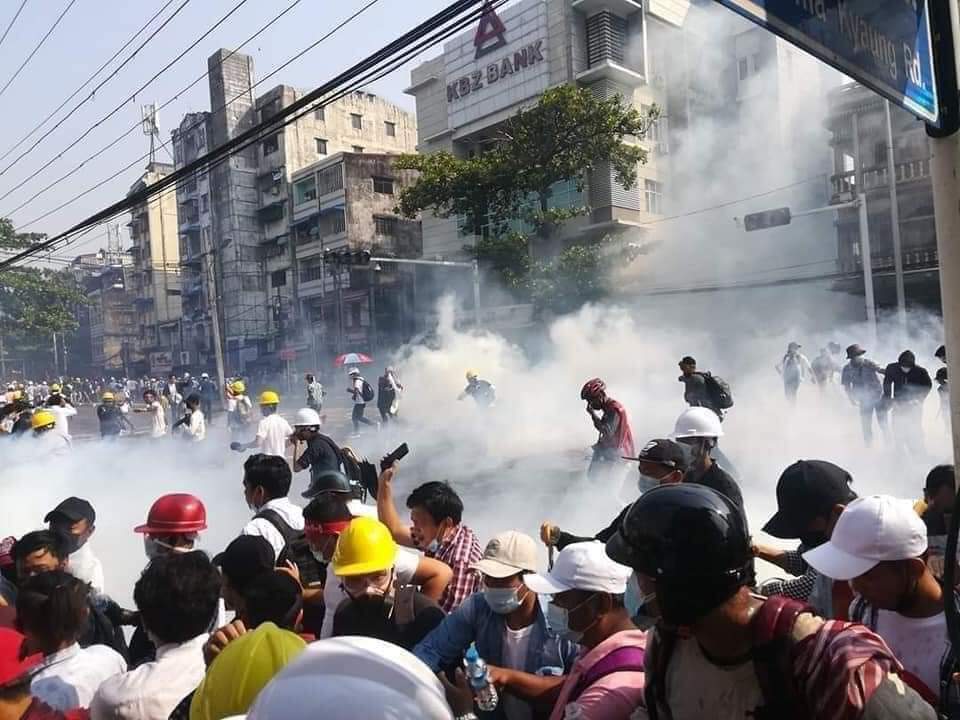 Yangon, Myanmar (GNJ): The Association of Southeast Asian Nations (ASEAN) which is impotent, has only oral called on “ all parties” in Myanmar to “ refrain from instigating further violence” in a statement, after a special meeting to discuss the country’s political crisis following a military coup.

The common statement mentioned that the group “ heard some calls for the release of political detainees,” a reference to foreign ministers from Malaysia, Singapore and Indonesia calling on the junta to free Aung San Suu Kyi and other detained leaders.

Malaysian Foreign Minister Hishammuddin Hussein called for the “ prompt and unconditional” release of Suu Kyi, the de facto head of Myanmar’s government who was detained by the military last month. In an apparent concession to the Myanmar junta, the Malaysian minister suggested ASEAN, which counts Myanmar as a member, could “ help bridge the discrepancies found in the last elections” .

Myanmar’s military justified the coup by describing as fraudulent November elections won in a landslide by Suu Kyi’s National League for Democracy (NLD), a claim that the country’s election commission dismissed.

“ If the situation continues to escalate, there will be serious consequences for Myanmar and ASEAN and our region,” Balakrishnan warned, calling for a US-ASEAN foreign ministers’ meeting to be held “ as soon as possible” .

The good intentions and willingness of ASEAN member countries would be meaningless if Myanmar did not open the door for them, echoed Indonesian Foreign Minister Retno Marsudi.

Ahead of the meeting, Singapore’s Prime Minister Lee Hsien Loong told the BBC that the use of “ lethal force” by the Myanmar junta against protesters was “ unacceptable” and Suu Kyi should be freed.

But Lee argued against economic sanctions, saying “ it will not be the military or the generals who will hurt. It will be the Myanmar population who will hurt” .

Lee warned that trying to ostracise Myanmar’s military could prove counter-productive, pointing to precedents set during Myanmar’s previous military regime, which resulted in the ruling generals being pushed into a closer relationship with China.

A young girl, Gloria Cho Pan Chit who is just 15 years old said she was very sad to hear any practical actions were laid down by Asean.

The decision to invite the new foreign minister of Myanmar’s military government to the ASEAN meeting drew criticism on social networks.

The Civil Disobedience Movement (CDM), one of the leading protest voices in Myanmar, said ASEAN should not have dialogue with the junta.

“ We understand the importance of dialogue. But junta has abused ASEAN since 1997,” the CDM said in a tweet mentioning Balakrishnan and his Indonesian counterpart and the year Myanmar joined the group.

There was renewed violence by security forces against demonstrators on Tuesday, with witnesses on social media and local media outlets reporting turmoil across the country.

Injuries were reported in several places, including in the northern town of Kalay, Frontier Myanmar reported.

Large rallies were also staged in the country’s largest city, Yangon, and the northern city of Mandalay.

“ No matter how hard they go against us, we will fight. We will find a way to get back on the streets,” a demonstrator told Frontier Myanmar.

“ This is the only way to show that people no longer want a dictatorship.”

At least 18 people were killed and more than 30 injured in country-wide protests on Sunday, according to the United Nations. (Copied from Australian Associated Press and also some words were contributed by Joseph Kung Za Hmung)