Give Peace a Chance in Kachin Lands by Cardinal Charles Bo 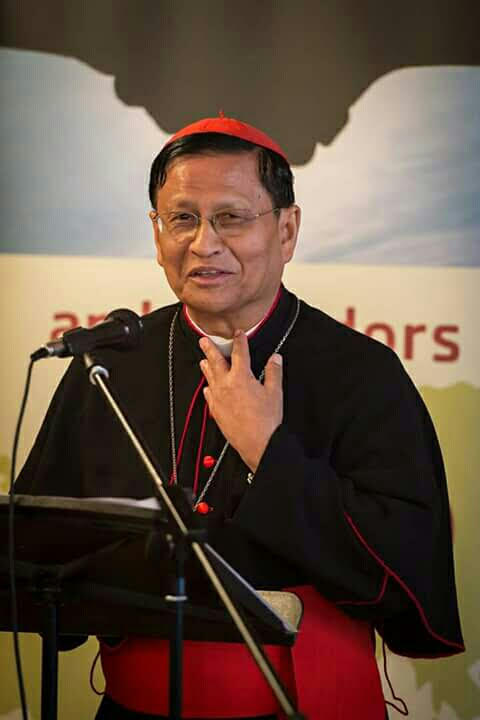 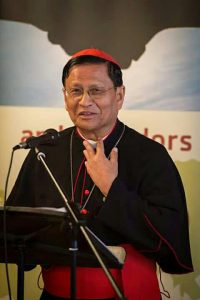 On behalf of  all the people of good will, I take this opportunity to  make an urgent appeal for peace and reconciliation in this long suffering nation.   I call upon my country men and women to seize the opportunity for greater democracy, peace and justice. After six decades of suffocating political system,  democracy has been enthroned through the sacrifice of  hundreds of our country  men and women.  We are grateful to all for this spring of democracy. I  applaud all, the political parties, the army, the civil society and religious leaders for their sagacity. Things are not the perfect but we are miles away from ten years ago. Myanmar stands on the world stage with great dreams.  But   there are areas where this dream is still to reach.   I refer to the war ravaged Kachin areas.  More than 150,000 languish in camps.  Their life is being diluted  for the last five years.  The once proud people are reduced to the status of IDPs and expecting international handouts.  They have nowhere to go. Their lands are mined.  This chronic war has produced no winners.  Only losers.  The losers being the innocent people languishing in dark camps.  Land mines abound.  Human trafficking snatches the youth to virtual hell. Drug menace is an incremental death sentence on the Kachin youth. Natural resources are looted by any one with arms.  While the Kachins struggle for a roof over their head and food in their plates, billions are made through Jade mines in their land. This is the root cause of conflict. I earnestly appeal to all. I  am not a politician.  I wish to raise my voice on behalf of these people whose voice is  stifled. I have lived with these people for 22 years, speak their language.  I have known their pain.  I have known their tears.  I have known them as one of the most generous people, but today I see them waiting for food, shelter and other hand outs.    A valiant race is  brought down to its knees in injustice. What a sorrow! Their rich natural resources are looted by all  – including foreigners. As they stand at the bleak junction of history they look forward to the world to come to their help.  So my brothers and sisters,   moved by a human tragedy of immense proportion, I  make a compassionate  appeal on behalf of them to all.

To the religious leaders : Most of the Kachins are Christians – either Baptists and other denominations  or Catholics. I laud your accompaniment of your people in their hour of need.  But people themselves are raising the question : What is the position of religious leaders in this war?  We are not NGOs delivering international handouts to our people. Our faith makes us to pursue peace with justice.  Where are we in peace talks? I strongly feel  we are failing our people by not pro actively exploring peace.    Some of us have even  seen war as the only solution. War is always unjust said Pope John Paul II. There is no just war. There is no theological justification for spilling the blood.  Armed resistance has its place in a people’s struggle. But war is the last recourse.  There is no justification for seeking solutions  ONLY  through armed resistance.  We have allowed denominational discriminations, we have allowed IDP camps to be hotbed of denominational conflict. Is Christ divided?  When the innocent unharmed civilians are forced to  obey  all  kinds of armies,  lose their children to the war some of us chose silence. We need to remember the searing words of Rev Martin Luther King Jr “ This generation will weep not for evil deeds of the bad men, but for the appalling silence of the good men”.  We cannot be silent to the oppression of our people either government or any other  armed groups. As pastors we stay with the people especially those who are vulnerable.  The time has come  to wipe every tear from the Kachin’s eye.  That does not come through war alone.  Religious leaders need to believe in peaceful solution to problems.  Peace is the core of all religions. All human beings are brothers and sisters.  I appeal to my fellow religious leaders – both Baptists and Catholics  : Blessed are the peace makers.  We have a moral duty to promote peace.  Let us come together as Christian groups.  Without forfeiting our right to resist,  we must give a chance for this government to work for peace. Only ten years ago democracy was a dream in this country. Today  we have the march of democracy.  I do believe peace also will have its date with destiny in this land.  Give peace a chance.  Let us talk peace.