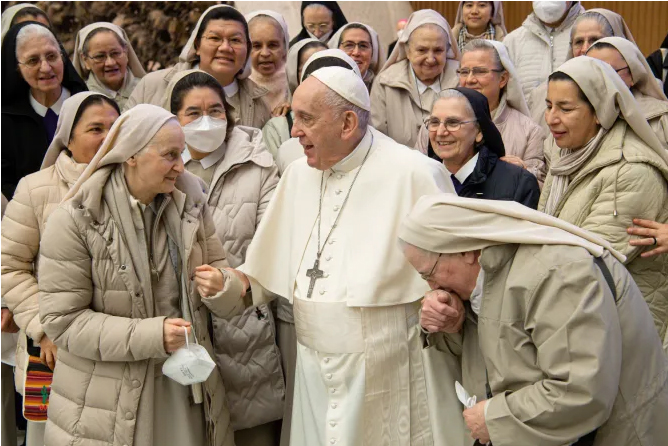 Pope Francis has urged nuns of the Catholic Church to “fight” back against mistreatment by priests.

In a video message shared to Twitter on 2 February, Pope Francis said “the church cannot be understood” without women.

But he said that some were treated unfairly by male members of the church, and urged them not to be discouraged.

“I invite them to fight when, in some cases, they are treated unfairly even without the church,” he said.

“When they serve so much that they are reduced to servitude, at times, by men of the church.

“Do not be discouraged. May you keep making God’s goodness known through the apostolic works you do. But above all through your witness of consecration.”

Let us #PrayTogether for religious sisters and consecrated women, thanking them for their mission and their courage; may they continue to find new responses to the challenges of our times. #PrayerIntention pic.twitter.com/3pX2vJnaNc

Elsewhere in the video, the Pope called on the public to pray for and support nuns, especially in their work helping “the poor, the marginalised and all those who are enslaved by traffickers”.

In 2018, a group of nuns told Vatican magazine Women, Church, World that they are often treated like servants by the Catholic Church’s cardinals and bishops.

The women, who were unnamed, recalled “waking at dawn to prepare breakfast and going to sleep once dinner is served, the house is in order and the laundry cleaned and ironed”.

They also told of “rarely” being invited to sit at the table they served and being made to eat in the kitchen by themselves, as reported by Reuters.

According to Global Sisters Report, the Catholic Church has seen a decline in the number of nuns around the world in the last decade.

Pope Francis made headlines earlier this month when he suggested that people who choose to have pets, such as cats and dogs, instead of children are selfish.

He said that choosing to have a pet was a “denial of fatherhood and motherhood and diminishes us, takes away our humanity”.

“Today…we see a form of selfishness. We see that some people do not want to have a child,” he said.

“Sometimes they have one, and that’s it, but they have dogs and cats that take the place of children. This may make people laugh but it is a reality.”

From news to politics, travel to sport, culture to climate – The Independent has a host of free newsletters to suit your interests. To find the stories you want to read, and more, in your inbox, click here.